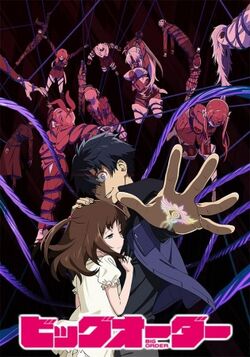 Big Order is an anime television series created by Asread and produced by Lantis and Rakuonsha. The series is based on the manga series of the same name. The series premiered on April 18th, 2016. The opening theme is "DISORDER" by Yousei Teikoku. The ending theme is "Kire Sekai Tsuiware" (毀レ世カイ終ワレ) by Aki Hata.

Ten years ago, a child wished for the destruction of the world. Now, a group of people has the ability to grant their wishes depending on their power. They are called "Order Users."

Before these great people who have the power of "Order," one person excels the most with the ability to rule and conquer the world and turn people into puppets when it is in his jurisdiction. This power belongs to Hoshimiya Eiji, who is also responsible for the destructive phenomena that happened exactly ten years ago.

Retrieved from "https://bigorder.fandom.com/wiki/Big_Order_(Anime)?oldid=6192"
Community content is available under CC-BY-SA unless otherwise noted.